Running from the Storm

Last week, as Nathaniel Smith and his daughter boarded a school bus to drive out of the path of Hurricane Laura, he thought of the last time a storm forced them to flee. Three years ago, Smith nervously called for a rescue crew as the unending rain of Hurricane Harvey drenched his home in Port Arthur, a refinery town on the Southeast Texas coast. As water rose inside the house, first one foot and then two, Smith and his daughter climbed onto his bed with two suitcases and tried to sleep. Early the next morning, they ventured out into the yard, which by then had become a lake, and stood on lawn chairs, hollering and waving until they flagged down a boat to carry them away from the flood.

Late last Wednesday night, as Hurricane Laura drew closer, Smith, now 66, remembered what Harvey had done to his home. Smith’s daughter, who is autistic and sometimes has seizures, lived with his ex-wife for much of the two years following Harvey as he worked to gut his house and then rebuild with some help from FEMA—treating the structure for mold, replacing the floors and walls, and purchasing new appliances.

As the potentially deadly hurricane sped toward the Texas-Louisiana coast last week, Smith sheltered inside Huntsville High School, about 140 miles northwest of his home. In cots spaced six feet apart, he and others braced for how their lives could again be changed by a storm. “A lot of us were afraid that after all we’d done to save our houses, it would all be gone,” he says. Officials estimate that Hurricane Laura inflicted up to $12 billion in damage to communities around the Texas-Louisiana border, including Lake Charles, which suffered the worst devastation.  Michael Barajas

But the storm veered east, crashing into a mostly-swampy area just across the Texas-Louisiana border. It narrowly avoided Port Arthur, postponing a potential nightmare scenario for the rest of the region—including predictions that enormous storm surges, powerful walls of rushing water and debris, could threaten areas miles inland. Experts have called the unusual storm a warning shot that demonstrates the increased threat posed by hurricane seasons super-charged by climate change, arguing it underscores the urgent need for better storm protections and infrastructure in areas likely to be hit. But Hurricane Laura also illustrates the disruption the increasingly frequent big, deadly storms cause for communities living along the Gulf Coast, even when they escape the worst.

In Lake Charles, Louisiana, where the storm made landfall, Laura tore through buildings and snapped utility poles like toothpicks, inflicting what officials already estimate to be billions of dollars worth of damage. To the west, in the less-affected Texas towns of Orange, Groves, and Port Arthur, winds uprooted trees, ripped the siding off buildings, and toppled power lines onto cars. Generators hummed across the region following the storm as power outages were expected to last for days and weeks in some places, contributing to more than a dozen deaths and many more hospitalizations due to carbon monoxide poisoning from improper generator use.

COVID-19 has complicated matters this hurricane season. Yolanda Roach, who’s still repairing damage that Harvey caused to her Port Arthur home, says even though her elderly parents evacuated during previous storms, they refused to leave last week—partly because they were worried about exposure to the coronavirus. “They said they were tired of leaving, tired of evacuating, but I think a lot of their reasoning was this COVID,” Roach says. “My dad had open heart surgery, he’s a diabetic, and so they’re worried about going to these shelters or a hotel.” Despite dire warnings that storm conditions could be “unsurvivable,” Roach rode out the storm with her parents and her young son, whom she worries already feels the stress of recurring storms. “Ever since we fled during Harvey, he’s always fixed to the weather report,” she says. “He gets more nervous whenever there’s bad weather. … He’s 10 years old, kids aren’t supposed to be worrying about stuff like that.”

The psychological toll of increasingly intense storms is one of many challenges facing people who live near the Texas coast, particularly in low-income neighborhoods or communities of color. Fair housing advocates say disaster recovery schemes along the Gulf have a pattern of favoring homeowners, who are more likely to be white and earn higher incomes, over renters. Last year, a civil rights group sued Texas and federal disaster recovery officials, claiming their plan for distributing billions in Harvey relief aid shortchanged hard-hit, low-income communities of color—including in Port Arthur, a majority Black and Latinx city, whose very existence has been threatened by displacement that followed previous storms.

Hilton Kelley, an environmental activist in Port Arthur, says that even close calls such as Laura compound existing injustices for people in the region. He pointed to public housing that sits in the shadow of sprawling chemical plants and oil refineries—facilities that released excess tons of cancer-causing and planet-warming chemicals into the air last week due to precautionary shutdowns ahead of the storm. “You’ve got communities that are being made to suffer pollution that both shortens their lives and contributes to these storms getting worse every year,” he says. “Mentally, what does it do to people? I wouldn’t say it beats you down, but the pressure builds. You start to feel like you’re always on edge.” 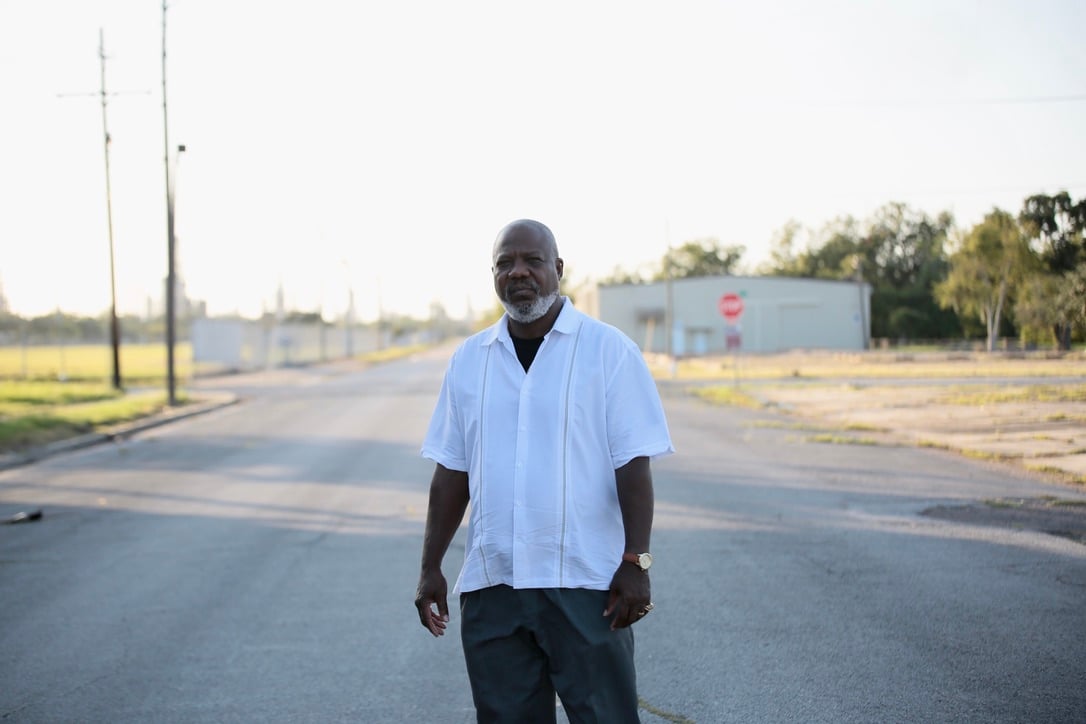 People living along the coast can expect increasingly violent hurricane seasons. According to climate scientists, storms like Harvey and Laura—rapidly intensifying systems that strengthen just before landfall—are becoming more likely, which can be especially dangerous if they catch forecasters and communities off guard and disrupt evacuation efforts. Without better planning that factors in climate change, like the long-overdue building of a coastal barrier, future storms could widen inequality along the coast, particularly if recovery efforts continue to overlook the needs of some of the region’s most vulnerable, storm-battered communities.

Nathaniel Smith says that running from the storms becomes harder as he gets older. While COVID-19 made him nervous about sheltering around others last week, he considered himself fortunate to have found a ride out of town, and then lucky that officials managed to find him and his daughter a hotel room in Spring for the last two nights before returning home. After Harvey, they bounced between shelters for weeks, long enough that Smith began to consider whether to leave Port Arthur for good. This time, he returned six days later to find his neighborhood relatively unscathed, relieved to sit on the question until the next storm.

Portraits of the Pandemic: Ordinary stories from an extraordinary summer.

When Asthma in Jail Becomes a Death Sentence: Deaths like Savion Hall’s are tragically common in Texas jails. What’s unusual are the criminal charges against the people responsible for treating him.

A Coral Reef Sanctuary in the Gulf of Mexico Could Triple in Size: The federally protected marine sanctuary has kept three major reefs safe from encroaching offshore oil drilling and commercial fishing.

The post Running from the Storm appeared first on The Texas Observer.