The illegal dump is southern Dallas’ most visible environmental justice crisis. It’s far from the only one. Deep Indigo Collective
For years, Marsha Jackson has lived next door to Shingle Mountain, an illegal dump consisting of hundreds of tons of roof shingles.

On hot, humid days, when the wind blows over Shingle Mountain, Marsha Jackson can’t breathe. For three years, a company called Blue Star Recycling dumped hundreds of tons of roof shingles in the lot next to her home and ground them up into dust. Eventually, the company created a pile so large it resembled a mountain shooting up out of the flat expanse of southern Dallas. Blue Star claimed it was saving the material from heading to a nearby landfill, but in truth, the company created a new, illegal dump, 50 feet away from Jackson’s bedroom window.

For the entirety of its three-year existence, the 100-foot-tall pile of ground-up shingles, which is now so much a part of the landscape that it’s been named, has sat uncovered. Shingle Mountain’s dust, which contains carcinogens like asphalt fumes, swirls into the air, settling on top of the homes on Jackson’s street, and into the lungs of the people who live there. Jackson has lived at her home in southern Dallas for 25 years.  Deep Indigo Collective

Jackson has been trying to do something about Shingle Mountain for years. She’s complained to the city, which tried to get the company to clean up its act; when that didn’t work, she sued the company, as well as the man who owns the land beneath the mountain. The attorney general’s office got involved this year, but nothing’s changed. Now, Jackson is also suing the city, claiming that its lack of action equals complicity. The lawsuit charges the city with violating Jackson’s civil rights by zoning the lot next to her home for industrial manufacturing.

It could take years to resolve the lawsuit and move the mountain, but Jackson knows that’s only half the fight. In the meantime, she’s working with local organizers and community advocates to get her neighborhood rezoned, and to form a new vision for her corner of southern Dallas.

Walking down her street on a recent July morning, Jackson points out the view of Shingle Mountain through the trees behind her property. A few weeks ago, Jackson broke out in a rash on her arms, a condition she suspects is linked to the glinting flecks of fiberglass embedded in the peak. Today, she scolds her 11-year-old granddaughter for forgetting to wear full sleeves in the 100-degree heat.

Jackson has lived in the same house, in a neighborhood called Floral Farms, since 1995. Back then, she says, the area was greener, almost rural. She keeps horses on her lot, and some neighbors used to grow greens to sell at the farmers’ market. Today, much of what she loved about her neighborhood is gone.“They knocked over my fence,” Jackson says. “The horses got out, the creek back behind the property got blocked up [by the shingles] and flooded.”

The mountain is visible from Jackson’s front steps. She still wakes up with headaches and a sore throat. She’s become the face of the fight against Shingle Mountain, because many of her neighbors, who are all Black or Latinx, don’t feel comfortable going up against the city or the company that created the illegal dump site.

Neither Blue Star nor the landowner responded to requests for comment. The mayor’s office did not respond to a request for comment, instead directing the Observer to a press release from June stating that the city was “exploring funding options… to ensure cleanup and hold the owners/operators responsible while minimizing potential impact on Dallas taxpayers.”

“There are no Shingle Mountains or any illegal landfills in predominantly White non-Hispanic residential neighborhoods in Dallas,” Jackson’s lawyers wrote in the lawsuit against the city. Deep Indigo Collective
A smokestack hovers over an industrial facility bordering Joppa, which is in one of the most polluted zip codes in Dallas.

Floral Farms isn’t the only residential neighborhood in southern Dallas polluted by industry.

Temeckia Derrough, the president of the Joppa Freedman’s Town Association, can walk to Shingle Mountain from her house in Joppa, a historic town settled by freed slaves. When the town was founded, many of its residents worked at the railroad and industrial facilities that border the Trinity River. “We’re surrounded [by industry] on all sides,” Derrough says. There’s a landfill, Interstate 45 and Loop 12, a railway yard, and TAMKO Building Products, which manufactures shingles.

This spring, a researcher at Paul Quinn College, one of the oldest historically Black liberal arts colleges in Texas, analyzed data from the Texas Commission on Environmental Quality (TCEQ) and found that the majority of the city’s industrial facilities are located in southern Dallas. With help from students, Evelyn Mayo, an associate professor, found that Black and Latinx neighborhoods south of downtown are disproportionately exposed to the pollutants produced at those facilities. Meanwhile, the predominantly white city council districts in North Dallas, bordering the wealthy enclave of Highland Park, had no permitted air pollution within their borders. Industrial facilities, like this railyard, are heavily concentrated near communities of color south of downtown Dallas.  Deep Indigo Collective

“Some places were planned to fail,” Mayo says. “They were planned in ways that prevented the flourishing of certain communities, at the expense of preserving other, more affluent and white neighborhoods.”

According to the Paul Quinn College report, Joppa residents breathe in nearly half a ton of air pollution every year. The smallest types of particulate matter pollution, PM 2.5, can be 30 times smaller than the width of a strand of hair. They’re especially dangerous when inhaled, and can cause an increased risk of respiratory issues, including asthma, as well as heart attacks and strokes. Of the 33 industrial facilities located in the same census tract as Joppa and Floral Farms, eight of them have racked up dozens of environmental violations and compliance issues over the past 20 years.

Jackson’s zip code has one of Dallas’ highest concentrations of particulate matter air pollution like dust, soot, and smoke. Less than a mile away from her front door lies the second largest landfill in Texas, McCommas Bluff, which releases methane and other pollutants. And every day, dozens of dump trucks pass by Jackson’s street, chugging brownish-black smog into the air. Jackson’s street is also boxed in by three major highways, which can get backed up for miles during rush hour—and all those cars also spew an alphabet soup of hazardous emissions: CO, NO, PM, VOCs, CH2O. Despite the industry concentrated in southern Dallas, the only city air monitor south of downtown was near an executive airport 10 miles away from Joppa and Floral Farms. According to TCEQ, that monitor doesn’t track PM 2.5 pollution. When the city decided to install another monitor in southern Dallas this year, they chose a site three miles away from Joppa and Shingle Mountain, in an area with barely any industrial activity. “What are y’all monitoring there?” Derrough asks exasperatedly. (The environment and sustainability committee, which placed the monitor, did not respond to a request for comment.)

So Derrough and an advocacy organization called Downwinders at Risk decided to monitor their own air. In July, the first of 11 air monitors, which cost about $1,200 each, were installed in Joppa. Professors at the University of Texas at Dallas are helping residents compile and analyze the data, which they hope will help them understand what’s in the air they’re breathing, and give them advance warning on particularly bad air quality days. “The city’s job is to protect us,” Derrough says. “We have to push them just to do their jobs.”

Conditions like asthma and heart disease are more prevalent in southern Dallas than the rest of the city. Jackson’s granddaughter, who lives with her, has asthma; so does Derrough’s son, which he developed after they moved to Joppa from Oak Cliff in 2006. The average lifespan for Black residents in the zipcodes that stretch between Shingle Mountain and Joppa is seven years shorter than the overall statewide average, according to a study from UT Southwestern. Though the report doesn’t point to a singular cause for the disparity, residents suspect there’s a strong correlation with the polluted air they’re breathing. 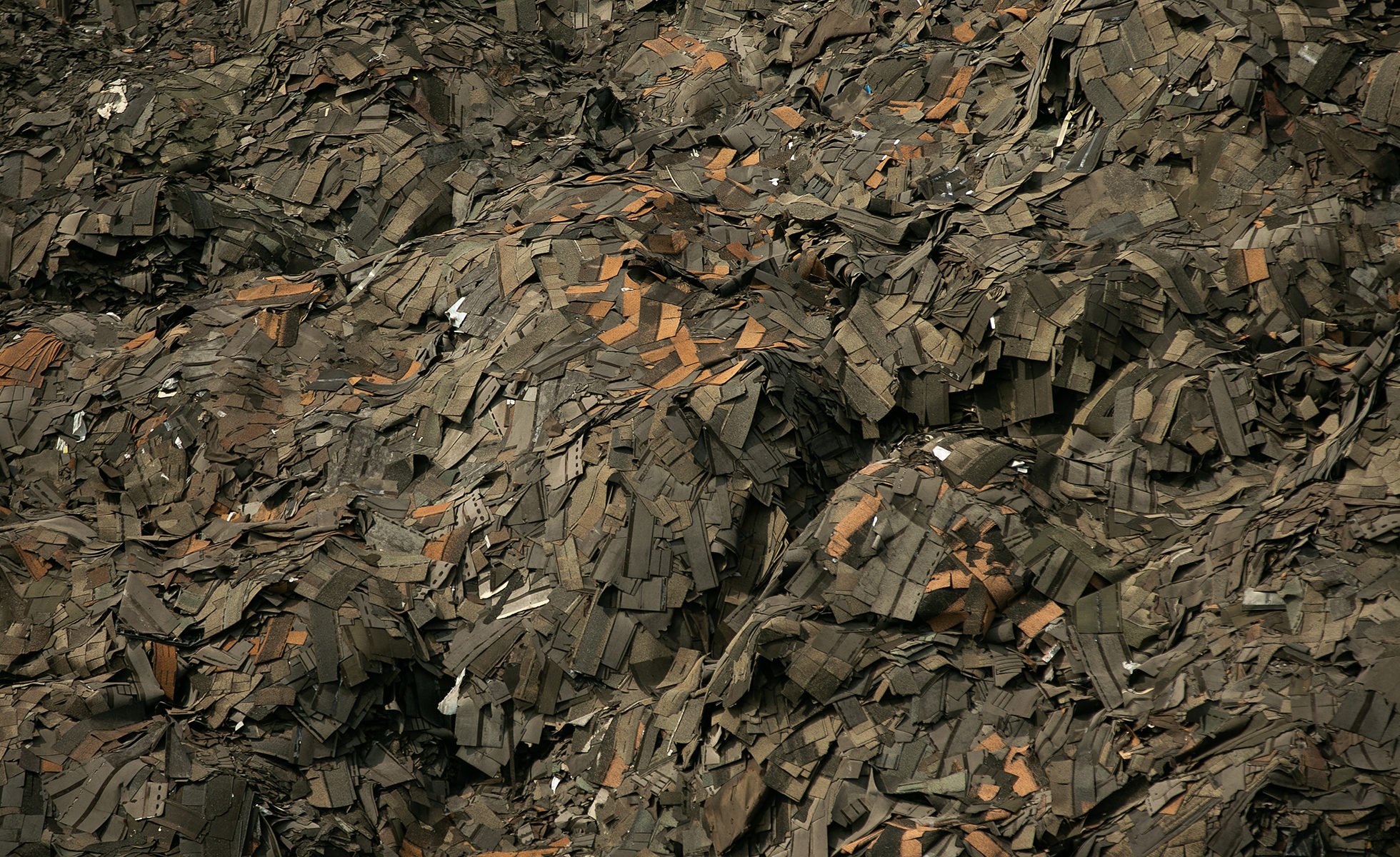 Deep Indigo Collective
Shingle Mountain’s dust, which contains carcinogens like asphalt fumes, swirls into the air, settling on top of the homes on Jackson’s street, and into the lungs of the people who live there.

Jackson’s lawsuit against the City of Dallas focuses on the fact that there has been almost no attempt to put up any of the money needed to remove Shingle Mountain. This, despite a $2.5 million cleanup effort approved by City Council in 2015 to move Argos Cement plant from the rapidly gentrifying Trinity Groves neighborhood.

If Shingle Mountain disappears, the empty lot will still be zoned for industrial use. That means something else just as dangerous could become Jackson’s new neighbor. It’s happened before: Several years ago, a wood recycling facility that had repeatedly violated its clean air permits in another part of the city was allowed to relocate next to Jackson’s house.

Jackson and other community advocates, through an organization called Southern Sector Rising, are trying to develop a new vision for their corner of southern Dallas to rally around. This year, Dallas will start updating its comprehensive urban plan, Forward Dallas, which was adopted in 2006. Peer Chacko, Dallas’ chief planning officer, says that includes documenting the existing zoning inequities the city itself helped create. “In the 1980s, the city overhauled its zoning,” Chacko says. “My first impression, when I came to the city in the ’90s, was that it was still a mess. I have to assume the intentions were good, but it didn’t solve all the problems.” Case in point: Shingle Mountain still towers over single-family homes. Jackson and a community advocacy group called Southern Sector Rising organized a press conference in front of Dallas City Hall. The city has not allocated any funding to clean up Shingle Mountain.  Deep Indigo Collective

Through Forward Dallas, the planning department has focused on community outreach. This summer, Chacko gave a brief presentation during one of Southern Sector Rising’s virtual town halls. “A lot of southern Dallas is being disregarded, and kind of piecemeal zoned for whatever the market wants it to be,” Mayo says. “We’re trying to flip that narrative and put the neighborhood first.”

Everyone has their own vision for what southern Dallas could look like in the future. Jackson dreams of being able to have barbecues in her backyard again. She wants her great-grandkids to visit without fear that breathing the air in her backyard could cause them to develop asthma. Maybe a soccer park and a horse pasture, too, at the end of the road.

She knows it could take years to settle the lawsuit against Shingle Mountain’s owners. People always ask her if she’ll move somewhere with cleaner air and less industry. She doubts she would get much for her house if she tried to sell, even if she wanted to. “This has been my home for 25 years,” she says. “Why would I let a company run me out, when the city never should have let them in here?”

Texas Already Lacked Affordable Child Care. Then COVID-19 Hit: The coronavirus has temporarily or permanently closed almost half of all child care providers in the state, leaving few options for low-income working families.

Showtime’s ‘Outcry’ is a Nuanced Exploration of a Wrongful Conviction, but Neglects a Longer History of Moral Panic: After Greg Kelley was falsely accused of sexually assaulting a child in Leander, he endured a questionable trial and a drawn out appeals process. A new documentary series captures the case, but not the whole story.

The post Marsha Jackson Is Trying to Move Shingle Mountain appeared first on The Texas Observer.