In the decade leading up to 1920, suffragists in Texas won a series of dramatic victories for women’s voting rights. They organized to impeach a governor, convinced his replacement to partially enfranchise women by promising to support his reelection, and leveraged their new voting power to lobby crucial support for the Nineteenth Amendment—which prohibits denying citizens the right to vote on the basis of sex—in both the U.S. Congress and the Texas Capitol.

Despite their importance to the amendment’s eventual ratification 100 years ago, Texas’ suffragists remain relatively unknown. For suffragists of color, this is nothing new—their contributions were often ignored and erased even in their own lifetimes. But today, even Minnie Fisher Cunningham, the leader of the late-1910s legislative organizing charge who would go on to run for U.S. Senate and governor and co-found the Texas Observer in 1954, is nearly forgotten. “[Cunningham] played a key role in ratification but never got much recognition in our history books,” says Ellen C. Temple, who co-founded the Texas Women’s History Project and has published several works of scholarship on Texas women’s history. “As we got close to 2020, I got to asking friends, ‘Do you know who Minnie Fisher Cunningham was?’ No one said yes.”

Temple is hoping to rectify that cultural amnesia by producing a film on the Texas suffrage movement, Citizens at Last, aiming for release this fall. At the same time, Texas A&M-Commerce professor Jessica Brannon-Wranosky is at work on a sorely needed print history of the Texas suffrage struggle. Both film and book will have to grapple with the complicated story of a statewide movement that was strategically brilliant and often heroic, yet deeply segregated and staunchly xenophobic.

As Brannon-Wranosky tells it, Texas was never a headquarters for the national suffrage movement, but it was an important tipping point in the battle to secure federally guaranteed civil rights for women. “From Reconstruction all the way through the ratification of the Nineteenth Amendment, Texas is always considered promising ground,” she says. “Texas becomes extremely central to national suffrage victories.”

Important early groundwork in Texas was laid by women like Mariana Folsom, a traveling orator and one of the first ordained women in the United States. Her long journeys from town to town along the buggy routes and rail lines of 19th-century Texas to give speeches to small, sometimes skeptical audiences suggest the long-range vision and persistence that may be required to fight uphill battles for human rights in Texas.

Another often-overlooked Texas suffrage hero is Eliza E. Peterson, a Black woman from the Texarkana area who rose to national prominence as the leader of the African American division of the Woman’s Christian Temperance Union of Texas. Peterson crisscrossed the country as a prohibitionist orator in the 1910s. In Texas, as elsewhere, campaigns for women’s suffrage and for the prohibition of alcohol were often intertwined—the women’s movement saw bans on alcohol as a powerful tool against domestic violence, gambling, and venereal disease, among other evils.

“[Peterson was] giving speeches connecting both suffrage and temperance—that women need to vote and this is why they need to vote,” Brannon-Wranosky says. “She was acting in a very political and public way, and likely she was pushing for suffrage quietly. But being African American meant that she had to be very careful about that.”

Texas in the early 1900s was segregated under Jim Crow. The second half of the 19th century included a period of increasing state recognition for the political rights of Black people during Reconstruction, and a populist movement that included aspects of racial solidarity in the People’s Party of the 1890s. However, both brief periods of hope ended in backlash and disenfranchisement. By 1910, Texas was a one-party state controlled by segregationist Democrats who used poll taxes, a “white primary,” and other strategies to keep Black voters from influencing electoral outcomes. That year, 29 percent of white people and 2 percent of Black people voted. Indigenous people, who had lived in and controlled much of Texas’ territory as late as 1865, would not gain the right to vote until the 1960s. Cunningham grew up outside Huntsville and trained to be a pharmacist, but the job paid her only half as much as her non-degreed male co-workers. “Equal pay for equal work made a suffragette out of me,” she would later say.

Carrie Chapman Catt, the National American Woman Suffrage Association (NAWSA) president who was often viewed as the victorious general of the national Nineteenth Amendment battle, called Cunningham and her organization, the Texas Equal Suffrage Association (TESA), “the heavy artillery down in Texas.” Cunningham’s group comprised an army of pro-suffrage volunteers built over years of grassroots organizing.

In 1917, when James Ferguson, the state’s outspoken anti-suffrage governor, came under a cloud of scandal for meddling in the administration of the University of Texas, Cunningham recognized a window of opportunity. Her network distributed a dossier on Ferguson’s misdeeds to 2,000 local activists, along with instructions for how to run public awareness campaigns to call for his impeachment. When he was successfully replaced by tepidly pro-suffrage William Hobby, Cunningham forged a back-channel deal to support Hobby’ reelection, so long as he first passed primary-election woman suffrage. As Cunningham put it, “Vote in hand, we will quite naturally concentrate on the man who enfranchised us.” Hobby delivered on his end of the bargain, as did TESA and other organizations, which registered 386,000 female voters to return him to office for a full term. They also helped elect Texas’ first female statewide officeholder: Annie Webb Blanton, superintendent of public instruction.

Around the same time, Cunningham and her allies were lobbying Texas’ representatives in Washington, D.C., to support the Nineteenth Amendment. She organized a campaign to get every newspaper in Texas to run pro-suffrage editorials, forwarding between five and 50 such articles each day to one wavering U.S. Senator, Charles Culberson. Women’s newly won voting power in primary elections helped sway Texas votes in both houses of Congress, where the amendment passed by razor-thin margins and was sent to the states to ratify. TESA’s final push was to pressure the still-all-male Texas Legislature for support. This was won rather quickly under the watchful eye of Cunningham—who at one point declared of Hobby, “If he doesn’t support this amendment, he doesn’t have a political future”—and her allies, who guarded the train station to foil an anti-suffragist plan to flee Austin at the time of the vote and thereby break quorum in the Legislature.

Texas’ ratification was important because of the constitutional amendment process, which requires a three-quarters majority of states to formally consent. With 48 states in the union at the time, suffragists could afford to lose only 12. “Texas was the first state in the South to ratify, and that, of course, was due to Minnie Fisher Cunningham,” McArthur explains. “If all 13 Southern states had stood together and refused to ratify, as the governor of Louisiana was urging, NAWSA couldn’t possibly have gotten the necessary 36 votes.” 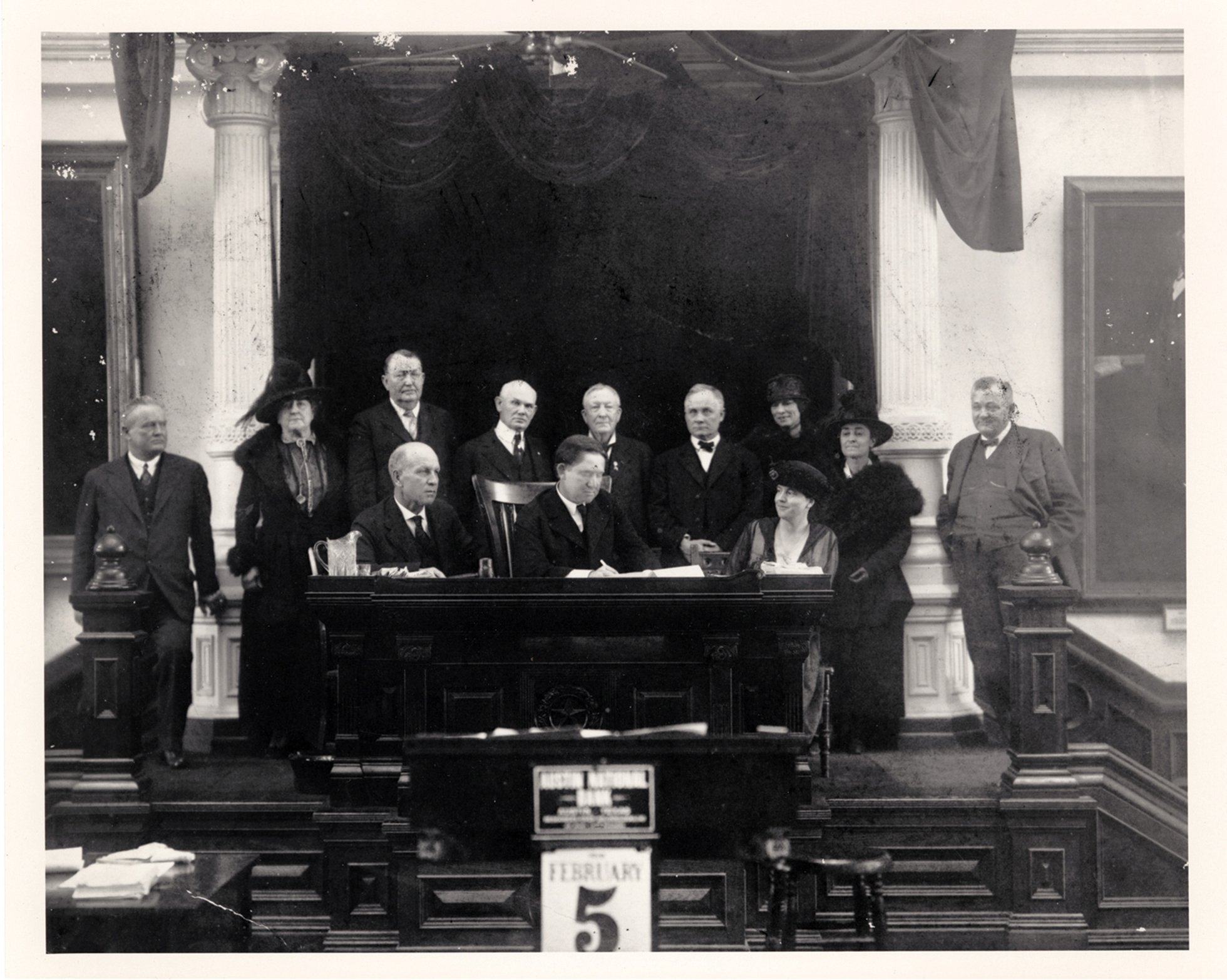 Cunningham’s accomplishments are not without blemishes. TESA relied on pro-suffrage campaign themes like “All-American Democracy,” which portrayed the women’s vote as a counterweight to “unpatriotic” World War I-era German immigrants. And Cunningham eventually supported requiring women to fill out registration forms in their own hand—a de facto literacy test that often excluded potential Hispanic voters.

Most tellingly, TESA excluded Black suffragists like El Paso NAACP vice president Maude Sampson from membership, bowing to the endemic racism of the period. While it’s clear from her published writing that Cunningham supported Black voting rights even in the mid-1910s, she did not dare express that opinion as she led the charge during the key 1917-1919 phase of suffrage victories in Texas. Racial equality was a non-starter in electoral politics in Texas in the 1910s, including among TESA’s allies. As for the anti-suffragists, Governor Ferguson, in a campaign against women’s right to vote, put his side’s perspective in the starkest terms: “Equal suffrage means equal ni****.”

“The race-baiters dominated the debate and the suffragists were always on the defensive, never able to puncture lies with facts,” McArthur explains. “That’s why the TESA didn’t dare admit Black women—it would have been political suicide.”

The daughter of a former slaveholding family, Cunningham entered the political arena with the profound privileges of a white, middle-class woman of her era. She chose to work within a racist system, a decision with important consequences for the civil rights of women of her station in Texas—but not, in the short term at least, for women of other oppressed groups. Her long and effective post-suffrage career includes a key role in pushing the first federal welfare bill through Congress with the League of Women Voters in 1921 and helping to organize a progressive coalition as the Texas Democratic Party split over the New Deal, and later, states’ rights and segregation.

One lasting result of TESA’s exclusionist policy is that heroic suffragists of color are often left out of history. This isn’t just a problem in Texas—last year, for instance, a New York City monument to suffragists was prominently criticized for “whitewashing” the early women’s movement. There are signs of improvement, however. For example, recent academic work by University of Texas San Antonio professor Gabriela González has helped to recover the story of Jovita Idár, a journalist who advocated for suffrage and other forms of racial and gender equality in Laredo newspapers in the 1910s.

The irony in TESA’s and NAWSA’s efforts to keep Black Southern suffragists at arm’s length is that the Nineteenth Amendment is modeled word for word on the Fifteenth Amendment, enacted in 1870, which was supposed to protect Black people from disenfranchisement but quickly failed to do so in the South. By acquiescing to Jim Crow-era systems of segregation, suffragists were in a sense acknowledging the fragility of their eventual constitutional achievement.

This underlines an important lesson from Texas suffrage history for modern-day activists: The struggle is never over, and past victories that we take for granted today could someday be reversed.

“[Progress] can always be taken away,” Brannon-Wranosky says. “When society gets comfortable, it’s less likely to stay diligent—and staying diligent all the time is exhausting. But rights are never permanently won.”

The post How Texas Women Delivered the Nineteenth Amendment appeared first on The Texas Observer.